Today, August 7th, is Purple Heart Day, a day to pause and remember those wounded or killed while serving in the United States military.

The medal’s predecessor was the Badge of Military Merit, created by George Washington on August 7, 1782  during his command of the Continental Army. At his headquarters in Newburgh, New York, General Washington devised two new badges of distinction. The first was a chevron shape to be worn on the left sleeve of the uniform coat for the rank and file who had completed three years of duty “with bravery, fidelity, and good conduct,” to honor loyal military service.

The second badge was a military order for soldiers who exhibited, “not only instances of unusual gallantry in battle, but also extraordinary fidelity and essential service in any way.” Washington designed the Badge as a “Figure of a Heart in Purple Cloth or Silk edged with narrow Lace or Binding.” 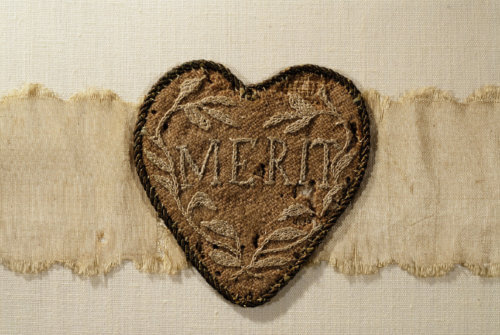 This award was intended to permit its wearer to pass guards and sentinels without challenge. The awardee would also have his name and regiment inscribed in a “Book of Merit.”

Notably, Washington intended the Badge to be awarded to noncommissioned officers and privates, a distinctively American idea. During that time, the practice among European countries was to honor high-ranking officers who had achieved victory in battle, rather than enlisted soldiers. The Badge of Military Merit is thought to be the first time in modern history that a military award was created exclusively for common soldiers.

Three badges were awarded in the waning days of the Revolutionary War, all to volunteers from Connecticut. On May 3, 1783, Sergeants Elijah Churchill and William Brown received badges and certificates from Washington at the Newburgh headquarters. Sergeant Daniel Bissell, Jr., received the award on June 10, 1783, just after the end of the American Revolution.

The award fell into disuse following the Revolution and was not proposed for use again officially until after World War I.

In October 1927, Army Chief of Staff General Charles Pelot Summerall directed that a draft bill be sent to Congress “to revive the Badge of Military Merit”. The bill was withdrawn and action on the case ceased on January 3, 1928, but the office of the Adjutant General was instructed to file all materials collected for possible future use.

Then, on January 7, 1931, Summerall’s successor, General Douglas MacArthur, confidentially reopened work on a new design, involving the Washington Commission of Fine Arts. Elizabeth Will, an Army heraldic specialist in the Office of the Quartermaster General, was named to redesign the newly revived medal, now known as the Purple Heart. Will retained the original Badge’s heart-shape, and added a profile bust of George Washington.

On February 22, 1932, the 200th Anniversary of George Washington’s birth, President Herbert Hoover officially revived the Badge of Military Merit as the Purple Heart.  The new design, which is used today, harkens back to Washington’s original badge: a heart made of purple cloth, and keeps the spirit of honoring soldiers of all ranks.

To date, it is estimated that more than 1.9 million service men and women have been awarded the Purple Heart.

To learn more about Purple Heart Medals in the Virginia War Memorial’s Collection read our 2019 blog post below: