During World War II, nearly 10,000 Virginians made the ultimate sacrifice while serving in the U.S. Armed Forces.

Five years later in 1950, the Virginia General Assembly authorized the construction of a memorial to honor and remember them.

By the time the Memorial was dedicated on February 29, 1956, remembering those Virginians killed during the Korean War had been added to the Memorial’s design. 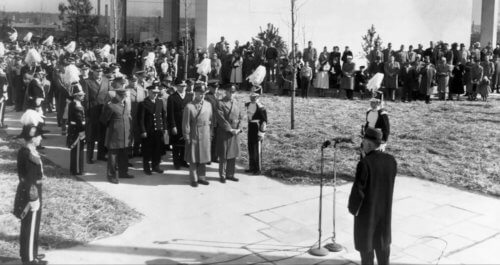 To design the Shrine of Memory, Architects Samuel J. Collins of Staunton and his nephew, Richard E. Collins, combined mid-century modernity with the timeless style of a Greek temple. The open pavilion fully embraces its dramatic site on more than four acres overlooking the James River and downtown Richmond – a view that’s seen through huge sheets of glass engraved with the names of the fallen.

With their names forever set against the backdrop of their capital city, they’re watched over by sculptor Leo F. Friedlander’s “Memory,” a 22-foot-tall statue of a woman in grief. An eternal flame flickers at her feet. 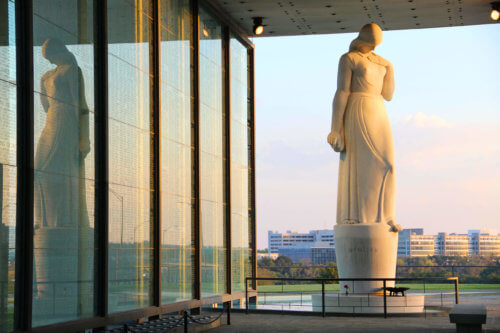 Over the years, in addition to commemorating WWII, the Shrine of Memory has expanded to include the names of Virginians killed in action during the Korea, Vietnam, and Gulf Wars, and America’s 21st century conflicts.

Today, nearly 12,000 fallen heroes are honored in the Shrine, ensuring Virginia will never forget their service and sacrifice. 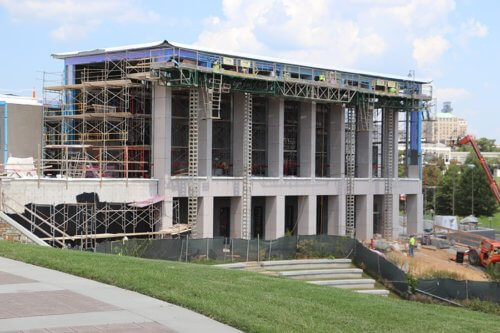 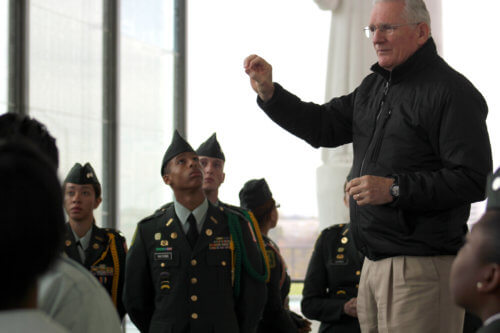 At the same time, the Virginia War Memorial has evolved from a passive space for remembrance and contemplation into a true museum and educational center. The facilities have grown to include a museum, veterans’ art gallery, studio for recording veterans’ stories, archives and collections, auditorium, lecture halls, classrooms, and outdoor amphitheater – all in keeping with the original architectural vision.

Together they make it possible to tell the stories that provide context for the shrine, helping future generations understand the sacrifices made by their military forebearers.