Served with the 1st Marine Division, 7th Marine Regiment, 3rd Battalion, G Company. While attempting to disengage his Company, and return to Hill 1425 near Yudam-ni, North Korea, Captain Cooney went forward to direct the final effort. As the final withdrawl was nearing completion, he was checking positions to make sure none of his men were being left behind, when he was killed by an enemy sniper. Several men from the Company were wounded while attempting to assist Captain Cooney. 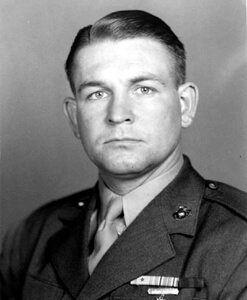