He received the Silver Star for gallantry in action. The citation states, ” Late in the afternoon the Company was heavily engaged in combat with North Vietnamese Forces which occupied extremely well fortified caves and bunkers. One platoon was pinned down by a vicious barrage of enemy grenades, automatic weapons and 12.7-mm. machine gun fire. Lying in an exposed position near a cave with an enemy machine gun in it, Corporal Reed established communications and from his vantage point called in fixed wing aircraft, 81-mm. mortar fire and a UH-1E gunship with devastating results. Although painfully wounded in the leg, he continued to adjust supporting fires and calmly reported the relocation of an enemy machine gun which he knew was being moved to fire at him and which subsequently did wound him a second time. Despite his serious condition, he continued to operate his radio for another two and a half hours, directing recoilless rifle fire on enemy positions to prevent the survivors of the platoon from being overrun, until he finally succumbed to his wounds. Corporal Reed’s courageous actions and loyal devotion to duty saved many of his fellow Marines and were in keeping with the highest traditions of the Marine Corps and of the United States Naval Service. He gallantly gave his life for his country.”

He was a graduate of William Fleming High School and is buried in Blue Ridge Memorial Gardens, Roanoke, Virginia. 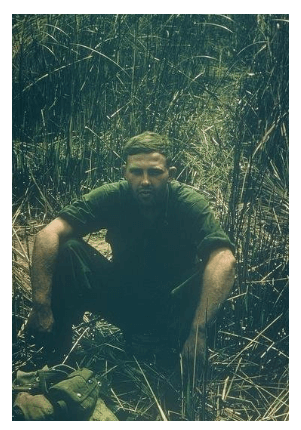