Major Kesterson graduated from Wilson Memorial High School in Augusta County in 1953 and from Virginia Polytechnic Institute in 1958 with a civil engineering degree; he also held a master’s degree from Stanford University. He worked for the U.S. Bureau of Public Roads in California before entering the Army in March 1959. He served at Ft. Benning, Georgia; at Ft. Riley, Kansas; at Ft. Belvoir, Virginia; and in Korea. He was serving with A Company, 1st Engineer Battalion, 1st Infantry Division, when he stepped on a Viet Cong land mine during “Operation Birmingham” on the Vietnamese side of the Cai Bac River along the Cambodian border. 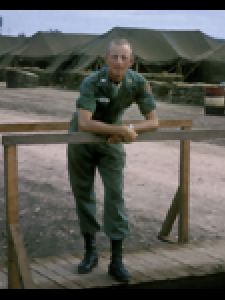