Lieutenant Augustine served with the 366th Bombardment Squadron, 305th Bombardment Group, 1st Bombardment Wing, 8th Air Force. He served as the Navigator of B17 # 43-38074 that was hit after dropping bombs over Berlin. All of the other crew members were captured by the Germans. He graduated from Westhampton High School and attended the Virginia Military Institute for two years. 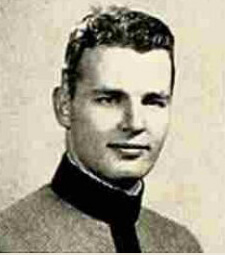