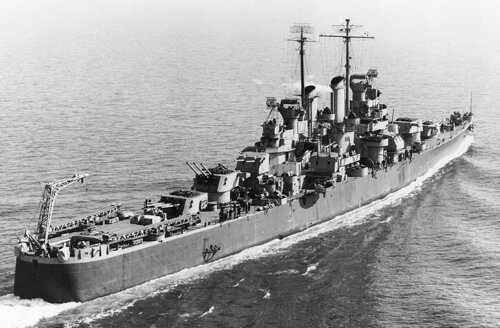 USS Birmingham was laid down at the Newport News Shipbuilding and Dry Dock Company of Newport News, Virginia, on February 17th, 1941 and was commissioned on January 29th, 1943. During World War II, Birmingham was first assigned to the Atlantic Fleet and gave support during the invasion of Sicily. She was then reassigned to the Pacific Fleet and participated in the raids on Tarawa and Wake Island. During the landings in Empress Augusta Bay at Bougainville, Birmingham took damage from two Japanese torpedoes, the first damage she sustained. Birmingham went on to support the Allied invasions of several islands in the Pacific. Birmingham suffered great topside damage during the Battle of Leyte Gulf on October 24th, 1944. A kamikaze plane struck the nearby USS Princeton; Birmingham’s crew assisted in an attempt to rescue Princeton’s crew and extinguish fires onboard, but when the Princeton’s bomb magazine exploded, many crew members perished. In total, 239 men died and over 400 were wounded. Throughout the course of WWII, Birmingham received eight battle stars. She was decommissioned in 1947.

Rear Admiral John Marocchi served in the United States Navy for decades, with a career that spanned service in World War II, the Korean War, and the Vietnam War. Admiral Marocchi was a recipient of the Purple Heart and the Legion of Merit, was one of very few Navy officers to complete Army Airborne training, and served for over fifteen years as a member of the Board of Trustees of the Virginia War Memorial. He was a person who used every opportunity to teach those around him, and all were able to benefit from his experience and perceptive view of the world around him. In his memory, a scholarship has been created to encourage and enable motivated individuals who plan to enroll in the Reserve Officer Training Corps (ROTC) at a Virginia school of higher education. The Virginia War Memorial Foundation’s RADM John Marocchi Memorial Scholarship provides two awards of $2,500 each given to two graduating seniors from Virginia high schools. 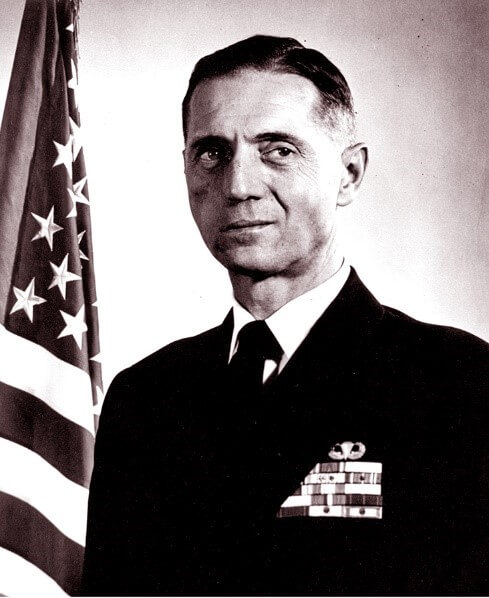 As the fundraising for the Paul and Phyllis Galanti Education Center was happening, Rear Admiral John Marocchi, a longtime Virginia War Memorial Board Member, reached out to his fellow members of the USS Birmingham CL-62 Association. Admiral Marocchi proposed that the Association raise money to name the planned research library after the USS Birmingham. When the Paul and Phyllis Galanti Education Center opened in 2010, the USS Birmingham Research Library was home to approximately 1,000 titles. Space limitations led to a reorganization and refocusing of the library in 2017. Mass produced and widely available publications that were easily found elsewhere, and items that were outside of the scope of the library were sold at our annual Book Sale and “Artifacts Roadshow” and in the Memorial Store with the proceeds going directly to the Virginia War Memorial Foundation, supporting the Memorial’s education programs.

Today, the library continues to focus on Virginia at war, and the role of Virginians who have served. The 2020 opening of the C. Kenneth Wright Pavilion provided a new, dedicated home for the USS Birmingham Research Library, which now also contains the Virginia War Memorial Archives.

The USS Birmingham Research Library and the Virginia War Memorial Archives are available and open by appointment only. Feel free to contact the Archivist by email (stephanie.haeg@dvs.virginia.gov) to schedule a time to visit these collections.