Through the night of February 2, 1943, the S.S. Dorchester was traveling from New York to Great Britain.  Once a luxury coastal liner, the 5,649-ton vessel had been converted into an Army transport ship, and was crowded to capacity, carrying 902 servicemen, merchant seamen, and civilian workers.

That evening, the captain ordered the men to sleep in their clothing and keep life jackets on. Many soldiers, deep in the ship’s hold, disregarded the order because of the engine’s heat. Others ignored it because the life jackets were uncomfortable.

Aboard the Dorchester, panic and chaos had set in. The blast had killed scores of men, and many more were seriously wounded. Loss of power from the blast prevented the crew from sending a radio distress signal, and no rockets or flares were launched to alert the escorts. Many passengers were disoriented in the darkness.

Passengers quickly began to overcrowd lifeboats to the point of capsizing, according to eyewitnesses. Other rafts, tossed into the Atlantic, drifted away before soldiers could get in them.

Quickly and quietly, the four men spread out among the soldiers, working to calm the frightened, tend the wounded and guide the disoriented toward safety.

“Witnesses of that terrible night remember hearing the four men offer prayers for the dying and encouragement for those who would live,” remembered Wyatt R. Fox, son of Reverend Fox. 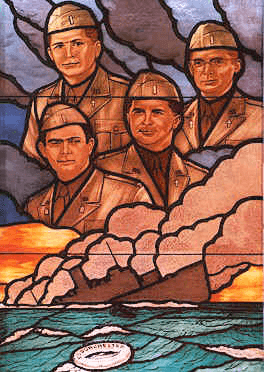 One witness, Private William B. Bednar, found himself floating in oil-smeared water surrounded by dead bodies and debris. “I could hear men crying, pleading, praying,” Bednar recalls. “I could also hear the chaplains preaching courage. Their voices were the only thing that kept me going.”

As the ship sank and most of the remaining passengers were topside, the chaplains opened a storage locker and began distributing life jackets. When there were no more lifejackets in the storage room, the chaplains removed theirs and gave them to four frightened young men.

“It was the finest thing I have seen or hope to see this side of heaven,” said John Ladd, another survivor who witnessed this selfless act.

As the ship went down, survivors in nearby rafts could see the four chaplains–arms linked and braced against the slanting deck. Their voices could also be heard offering prayers.

Of the 902 men aboard the S.S. Dorchester, only 230 survived. When the news reached American shores, the nation was stunned by the magnitude of the tragedy and heroic conduct of the four chaplains.

Lt. Gen. Brehon B. Somervell, Commanding General of the Army Service Forces posthumously awarded the men the Distinguished Service Cross and Purple Heart on December 19, 1944 in a ceremony at the post chapel at Fort Myer, VA.

A one-time only posthumous Special Medal for Heroism was authorized by Congress and awarded by President Eisenhower on January 18, 1961. The special medal was intended to have the same weight and importance as the Medal of Honor.

Today, 78 years after the Dorchester sunk beneath the ocean surface, the story of these four men inspire people to serve and support one another regardless of their faith or religious affiliation.

We invite you to register for our LIVESTREAM at 2pm on February 3rd for a closer look into the events surrounding the sinking of the Dorchester.