Virginia is home to ninety-five counties and thirty-eight independent cities. Those cities and counties sent nearly 12,000 Virginians to war who never returned home between World War II and the Persian Gulf War. Sadly, additional service men and women have been killed in action since 2001 in the Global War on Terror, and the Virginia War Memorial is currently creating an addition to its site to honor those individuals.

Since its opening in 1956, the Virginia War Memorial has remained committed to honoring Virginians killed in battle whilst defending freedom. Today, the Memorial shares their stories of service and sacrifice to educate and inspire visitors. In support of this mission, the Education staff at the Memorial continually develops student and adult programming that encourages patriotism but also expresses the human cost which is often paid in the pursuit of freedom.

In my time interning with the Education team, I have grown a passion for teaching about America’s wars, sharing the importance of the War Memorial, and emphasizing to students that freedom is never free. There is a human cost to our ability to live freely as we do in the United States. If young citizens and students across Virginia and the United States do not understand the context of why these service people gave their lives, there will likewise remain a disconnect in their understandings of freedom, service, and sacrifice. The Virginia War Memorial strives every day to do more than merely teach about battles and dates. The War Memorial’s volunteers and staff give students a close up look at the human experiences of the military and their families. Sharing these intimate stories is truly something of which I am grateful to be a part.

At the end of October, I was fortunate enough to assist with a teacher focus group consisting of secondary history teachers from central Virginia. One teacher said something that struck me. She noted that while she is capable of teaching her students about American military history, she continues to bring her students back to the War Memorial for educational programming and tours because the we provide those personal stories in such a valuable way. The Virginia War Memorial incorporates the lives, services, and sacrifices of Virginians who participated in America’s wars–the perfect complement to a teacher’s history curriculum. 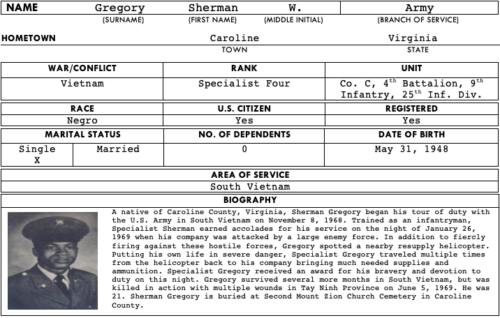 A ‘Personnel Record’ of a Vietnam Soldier from Caroline County, VA

To further strengthen this ability, at the beginning of this semester with guidance from the Memorial’s education team, I created a new educational program for field trip students which will connect them more personally with the names, faces, and stories of those Virginians who served and sacrificed during World War II and Vietnam.

I am currently developing around 300 authentic-looking, laminated paper, military dog tags and reproduction “personnel records” for a portion of the World War II and Vietnam names on the walls of the Shrine of Memory to be distributed to field trip students. These dog tags (with neck-chains, to-boot!) feature on one side a soldier’s name, branch of service, date of birth, and hometown.  On the reverse side, the dog tag features a picture of that soldier.

The tags are paired with a personnel record which includes more information about that service person. Designed to mimic a 20th Century military personnel record, these half-sheet laminated cards share not only the soldier’s picture, hometown, branch, and date of birth; but also their race, marital status, geographic area of service, and a personal biography that discusses the soldier’s early life, education, service story, circumstances of their death, any medals or accolades received. If available, the records will also feature details about their family, and where they are buried. 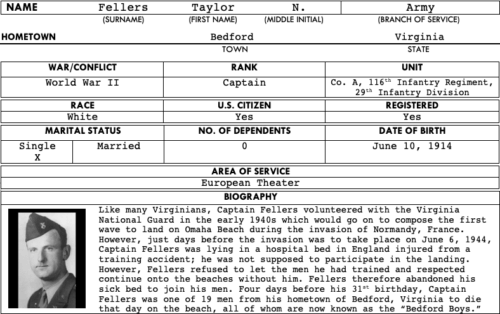 A ‘Personnel Record’ of a World War II Soldier from Bedford, VA

Tentatively named the Dog Tag Program, each student will be given a dog tag to wear around their neck and the matching personnel record. With this new tool, students will become more personally connected with the lives, personality, stories, and sacrifices of these Virginian casualties of war.

During their field trip, students will visit the Shrine of Memory (which lists by county, independent city, and conflict the thousands of Virginian casualties) to then search for the name on their dog tag. This connection with a specific individual will help each student better understand and connect with the gravity of these wars and events. 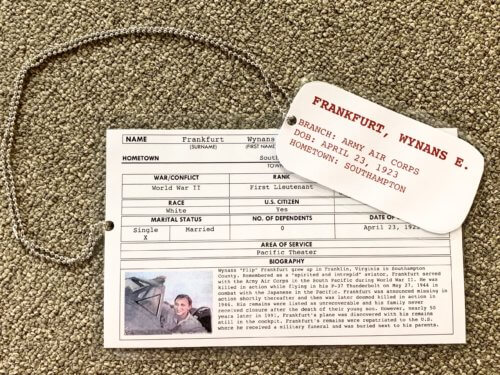 With this program, students will be doing more than just read the thousands of names inscribed on the Shrine Walls, but they will have connected with a person, their family, and their story of service and sacrifice. I can’t think of a better way to honor Virginia’s many casualties of war than by using their histories to inspire younger generations. 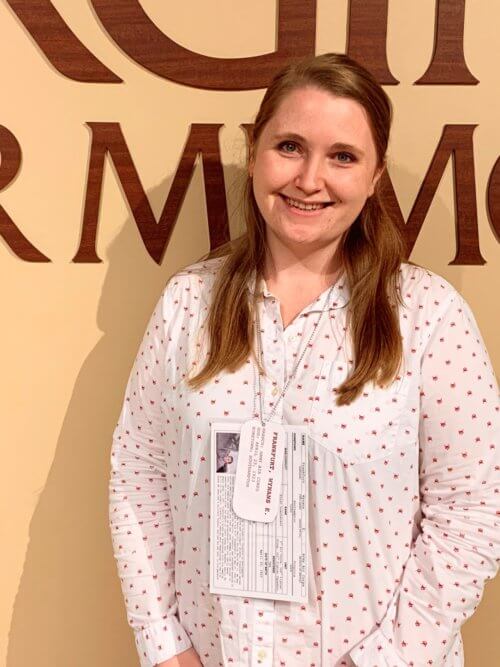 I am a second year M.A. History student in the graduate program at VCU. I began my internship at the Virginia War Memorial in August 2018 and have enjoyed my time working with the Education Department developing student programming which emphasizes the roles and sacrifices Virginians have made both on the battlefield and at home between World War II and the present.