News of Japan’s surrender, however, reached both American troops and the American public several weeks earlier. On August 14, President Truman announced in a radio broadcast that Japan had accepted the terms of unconditional surrender. A two day holiday was declared, with federal workers getting time off and essential war workers who were required to remain on the job received premium pay. Many local businesses followed suit, closing to allow people to spend time with loved ones. Newspapers published special editions about the surrender. Celebrations erupted across the country, ranging from neighborhood fireworks in Salem, Virginia, to an impromptu parade down Broad Street in Richmond. A Roanoke newspaper declared that after surrender was announced, that “Roanoke streets filled with cars, noise, confetti and humanity.” 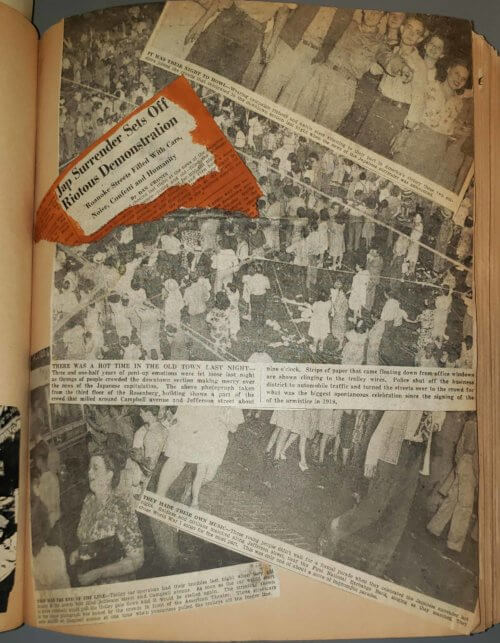 A scrapbook page with clippings describing celebrations in Roanoke after the public announcement of Japan’s surrender.

In the Virginia War Memorial Archives, we have many V-J Day related items that were saved by service members and their families. Some of those items include newspapers announcing Japan’s surrender, clippings of surrender celebrations, letters home talking about what the end of the war means personally, and diary entries. A typed history of the USS Van Valkenburgh created by a sailor at the end of the war includes a sketch of the celebrations that ships in their convoy engaged in–and then stopped–once they heard the surrender announcement and then learned that it wasn’t official yet. An August diary entry by a sailor aboard the USS Yorktown noted “I guess the war will soon be over. As far as this TF is concerned THERE IS STILL A WAR going on.” 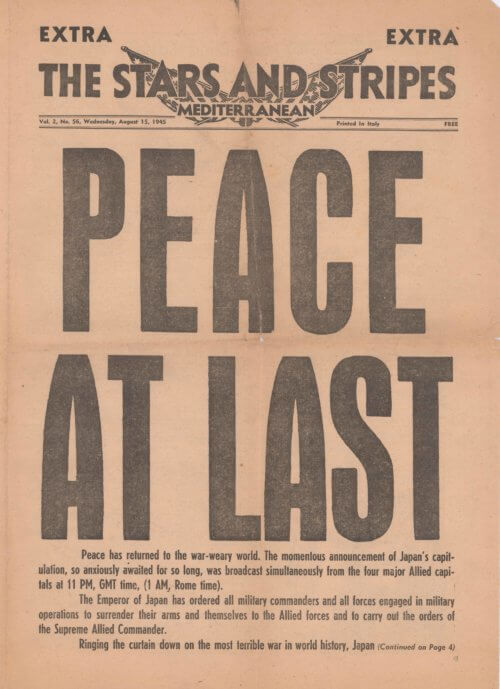 The front page of the August 15, 1945 edition of The Stars and Stripes.

From the Archives
Plan Your Visit