Seventy-eight years ago, the Japanese attacked Pearl Harbor. In the attack, more than 2,000 Americans were killed and more than 1,000 were wounded. Proclaimed “a date which will live in infamy” by President Roosevelt, the attack was the event that led to the United States’ formal declaration of war against Japan and entry into World War II.

In December of 1941, Clendon Pleasants, a native of Beaverdam, was already in the Army. He was training at Camp Wheeler, Georgia. The day after the attack on Pearl Harbor, Pleasants sent a letter home to his family. In it, he describes how he learned about the attack and the reaction of his fellow soldiers. Pleasants noted that after hearing all of the countries that had declared war on Japan he thought Americans may not have to do “so much fighting.” Pleasants had been in the Army for two months at the time. The text of his letter home follows.

We got in camp here about 4:00 o’clock this morning, we didn’t have any trouble on the way, and I slept a little bit.

The boy that I came down with had a radio on his car, and of course we heard all about Japan, and all they boys in camp new about it too, but they didn’t seem to be excited or don’t mind going, or rather want to go I believe, as we are in it. Every thing went on as usual today, you wouldn’t know we were at war any more than last week. We have been out on the machine gun range all day, but took time out to listen to Roosevelt speak.

I think, if we go, from this camp it will be a long time before we go.

After learning all the countries that have declared war on Japan, it don’t look like we will have to do so much fighting. Well I believe that is all the news here now, and I’m getting a little sleepy too, today I didn’t get a chance to sleep much.

The sandwiches and candy and stuff that you all fixed up was right good. The boys said to tell you to send me anther box like it some time, and they would let me toast it. 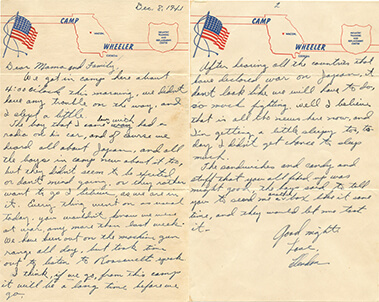 Pleasants served with the 168th Infantry Regiment, 34th Division (“Red Bull” Division) as a machine gunner. He was with some of the first American troops to arrive in Ireland, was part of the invasion of Algiers, and was awarded the Bronze Star for his actions in Italy. Like many soldiers, he was not the only member of his family to serve. His older brother Brown was with the Air Corps in the Pacific Theatre. Eldest brother Karl was a machine gunner with the 145th Infantry. While Clendon and Brown made it home safely after the war, Karl was killed in action on Luzon in the Philippines.