This February, as we celebrate the achievements and history of African Americans, we would like to share one story of one Virginian whose name is carved on the walls of the Shrine of Memory, Clifton Henry Davis.

Born in Danville on December 8, 1944, Clifton Henry Davis was a star student, graduating with honors from the the still-segregated Langston High School in 1962.

He was active in the Student Nonviolent Coordination Committee (the SNCC) in Danville, a civil rights group geared towards younger Black Americans.

In the summer of 1963, he participated in a number of civil rights protests and demonstrations in Danville, including a June 10 protest that would gain national notoriety as “Bloody Monday.” On that day, 38 protesters were arrested and jailed, including Clifton. That evening, 50 additional people gathered at the jail for a prayer vigil. They were attacked with water hoses and billy clubs by police officers and other city employees who had been deputized. More than sixty people were hospitalized with injuries from that incident.

By the time the protesters’ cases came to trial after more than two years and an attempt to remove the case from local jurisdiction, Clifton and most of the others were fined $20 and sentenced to ten days in jail. However, Clifton’s jail time was suspended, as he was already serving in the Army. The conviction was later overturned by the Supreme Court.

Clifton continued to participate in Civil Rights protests and demonstrations in Danville for the rest of that pivotal summer. 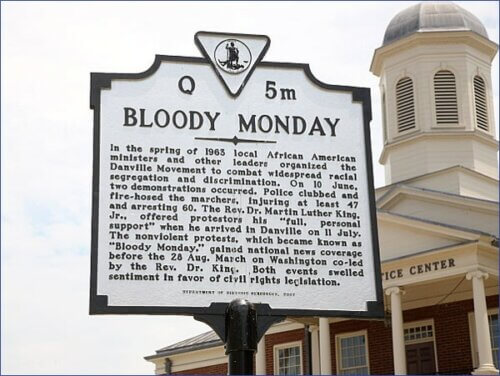 Davis attended Howard University and studied medicine. However, he left after his junior year in 1965 to join the Army, intending to take advantage of the free medical training the military offered.

Davis was assigned to be trained by Army doctor Howard Levy. Levy became an early resister to the Vietnam War. In 1967, he was court-martialed for refusing an order to train Green Beret medics on their way to Vietnam.

Levy believed the Army was using medics to “win hearts and minds in Vietnamese villages – while still burning them to the ground in search-and-destroy missions.” He considered the Special Forces (Green Berets) to be “killers of peasants and murderers of women and children.”

Clifton Henry Davis was one of the soldiers Levy refused to train and served as a witness in the doctor’s court martial. Davis testified that he had joined the Army to take advantage of the medical training available.

In response to a question about why someone facing discrimination at home would fight in the Army, Clifton responded, “For most of us, this is the only country we have, this is our home country, and it may not be the best place in the world, but at least it is home, and we should defend it like everyone else.” 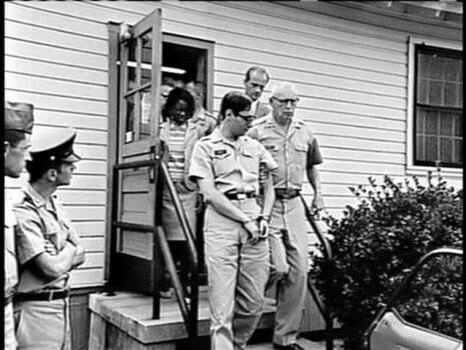 He arrived in Vietnam on September 3, 1967 as a medic and a Green Beret. On April 19, 1968, Davis’s strike force company was in enemy territory when he and other U.S. troops advanced on a Viet Cong position. Under a barrage of fire, Davis put himself in harm’s way to treat the wounded.

During the attack, Davis was shot, declined aid, and continued to fight from an exposed position, enabling the withdrawal of American troops from the location. He was hit again.

Davis died on the battlefield. He was twenty-three years old.

His obituary in the Danville Bee describes his actions in a riveting way. It reads, “Braving devastating fire, he stood up and directed a withering volley into the hostile positions. He repeatedly moved across the bullet-swept battlefield to treat casualties and encourage his men. The insurgents attacked the element’s flank and he was wounded by the savage fire. Refusing aid, he fought furiously and repelled the determined assault. Completely ignoring his safety, Sergeant Davis took up an exposed position and delivered heavy fire to cover the movement of his troops. He was mortally wounded while fearlessly and unselfishly placing the safety of his own soldiers above that of his own in the heat of battle. Sergeant Davis’ gallantry in action, at the cost of his life, was in keeping with the highest traditions of the military service and reflects great credit upon himself, his unit, and the United States Army.” 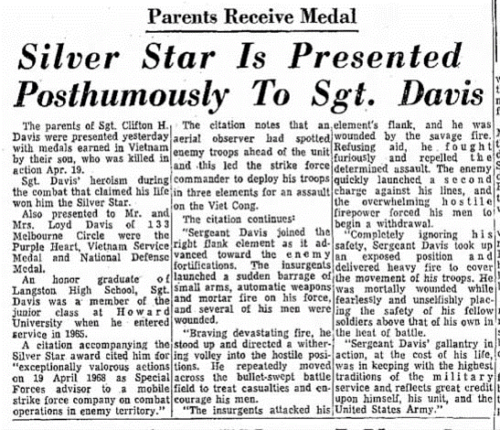 Clifton Henry Davis is just one of the many people of color who have stories of sacrifice and bravery on the battlefield. The Virginia War Memorial Foundation strives to preserve and share these stories every day. It is our mission to ensure Davis, and all Virginians who gave their lives, are never forgotten. 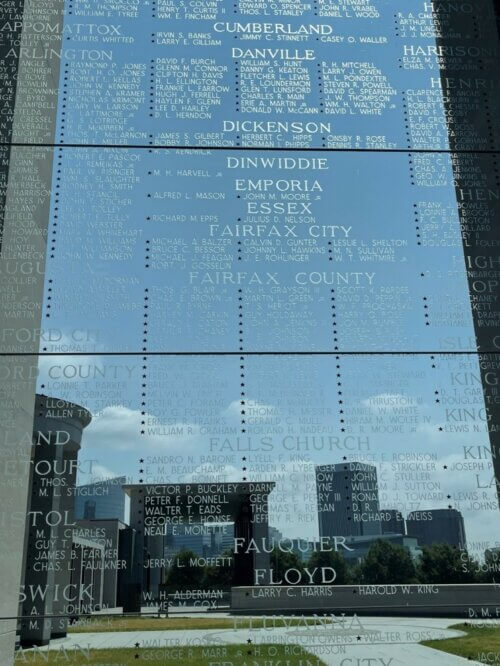