Courage. Bravery. Selflessness. We use those words often here at the Virginia War Memorial. Patriotism and sacrifice are commonly mentioned as well. All of these words, and several more, are needed to effectively describe the nearly twelve thousand stories represented by names etched into the walls of the Shrine of Memory. Visitors to the War Memorial find themselves quite literally surrounded by the embodiment of the indomitable American spirit.

If there is one section of the Virginia War Memorial that truly captures the essence of this, which underscores the amazing heroism that war often produces, then it is our new Medal of Honor Gallery.  The names and citations of fifty recipients of the nation’s highest award for valor line the gallery.  Each tells a story worth knowing.  There is one name in particular, however, that stops me every time I walk by it.  The name is Captain Humbert R. Versace, but the word that instantly comes to my mind is guts. Guts meaning extraordinary toughness. Guts meaning unparalleled bravery.  Guts meaning inspirational courage. 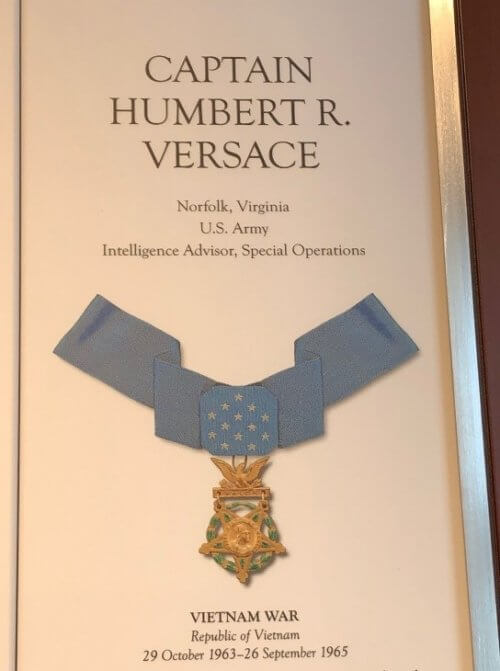 “Rocky” Versace was a member of a large military family.  They moved often, but lived longer in Alexandria (1948 – 1953) than anywhere else when Rocky was young. He graduated from Norfolk Catholic High School and, like his father, attended West Point, graduating in 1959.  He expressed a desire to enter the priesthood and serve as a missionary after his time in service.  In 1962, he deployed to Vietnam as an advisor to the South Vietnamese. Towards the end of his tour, his unit was ambushed by the Viet Cong in the U Minh Forest and Rocky was wounded and captured.

For two years, Versace and his fellow Americans endured hell in a small prison camp.  The Viet Cong tortured him, starved him, and tried everything to break him. This would have destroyed most men.  Rocky fought back, trying to escape four times. He harassed his interrogators incessantly. While the Viet Cong brutalized his body and waged an unrelenting campaign against his mind, he never broke. Not once. His mind and spirit remained defiant every single minute of every single day that he was imprisoned.  The North Vietnamese had to wonder who truly was the tormentor and who was the tormented.

In the end, when his frustrated captors realized that they would never break him, never defeat him, they led Rocky off to be executed.  By all accounts, the last memory his fellow captives have of Rocky Versace is hearing him singing God Bless America at the top of his lungs just before being killed.

Rocky’s remains have never been recovered. It took over four decades of commitment from friends, family, and fans before Rocky Versace was posthumously awarded the Medal of Honor in 2008 for his actions while a Prisoner of War.

The memory of Captain Rocky Versace is worth celebrating, and his story is worth telling over and over again.  In times of social and political upheaval we are terribly fortunate to have such stories to remind us what true patriotism – and true courage – really looks like.

by Clay Mountcastle, Director of the Virginia War Memorial.