Staff Sergeant Jones served with the 534th Bomb Squadron, 381st Group, Heavy, as a radio operator in a B17 #42-3525 that was hit by enemy fighters. Two crew members bailed out of the plane but seven were killed when the plane exploded and crashed two kilometres south east of  Frettenrode, Germany. 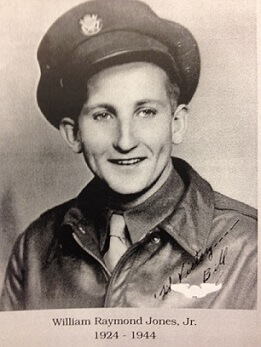