Pfc Heizer served in I Company, 3rd Battalion, 5th Marines, 1st Marine Division, III Marine Amphibious Force. On August 13, 1967, he was engaged in an operation in Quang Tin Province, Vietnam, 12 kilometers south of Que So, when he was struck by hostile rifle fire. He was taken to a hospital in Da Nang and then to the U.S. Army Hospital Camp Kue in Okinawa, Japan. He died there on September 6, 1967, with his parents by his side. He was a 1965 graduate of Robert E. Lee High School in Staunton. 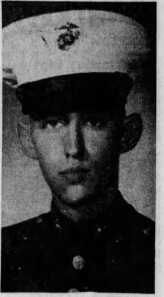