A few years ago I wrote a blog post about my experiences with Desmond Doss, the Hero of Hacksaw Ridge. Recently, I have had a good reason to revisit that blog, most of which follows. I met Desmond, a native of Lynchburg, Virginia, in 1994 when I worked at the Virginia Historical Society as Director of Development and Public affairs. He had been the subject of an advertisement we produced about the importance of preserving the stories of all Virginians.

Desmond and his (second) wife Frances lived in Rising Fawn, Georgia. We invited them in for lunch, to approve a museum advertisement and to talk with Desmond about loaning his medal of honor for an exhibit on V-J Day. More than twenty-five years after that lunch, I can still say that I have never met a more compelling person. He was slight in build, elderly, and fragile from injuries suffered in Okinawa. Even with hearing aids, he had a hard time hearing. What he might have lacked in physical strength was completely overcome by the obvious strength of his character and the truth of his beliefs. He was a spellbinding speaker. It was comforting and easy to listen to him as he spoke. He talked about his home in Georgia, about gardening, about God’s love, about the beauty of nature, about the greatness of this country, about his first wife Dorothy and her trials. He talked about the joy that Frances had brought to his life. And though he clearly loved Virginia, Georgia had won his heart. He spoke with humor, laughing often and drawing frequent chuckles from Frances.

My boss at the time, Charlie Bryan, one of the best historians and most talented administrators in the museum field, kept encouraging Desmond to talk about Okinawa and the fateful action that day and into the evening on Hacksaw Ridge. Charlie asked questions about Harry Truman and the ceremony when President Truman presented the Medal of Honor to Desmond. What was Desmond thinking at the time? What was the president like? 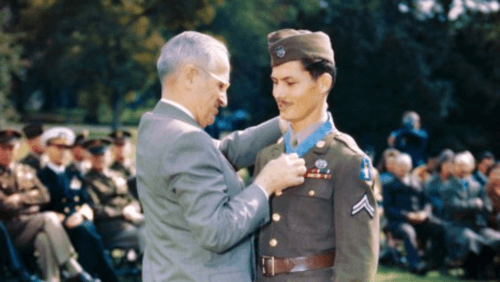 Desmond was so unaffected in his responses. There was no trace of ego and no personal pride. He didn’t use exaggeration or hyperbole in his retelling of the story. No great descriptors in the narrative—only a simple telling of facts. Above all, Desmond exuded a sense of wonder that we were interested.
After that lunch, I stayed in touch with Desmond and Frances for a while. They visited a time or two after that when they were on their way to Lynchburg.

I mentioned earlier that something had recently happened to cause me to revisit this blog. Just a few weeks ago, I “unretired” to accept the position as President of the Virginia War Memorial Foundation. One of my favorite galleries in the Virginia War Memorial houses an exhibition about the 50 Virginians who have been awarded the Medal of Honor. And there is Desmond, conscientious objector and noncombatant, who saved 75 men pinned-down by enemy fire on Hacksaw Ridge.

His story lives as do the stories of the 49 other Virginians who have been recognized for answering the call to duty, and for performing far above and beyond that call.

We invite you to visit the Memorial’s Medal of Honor Gallery. We will continue to share the stories of the War Memorial and Virginia’s veterans online for all to learn from.