A native of Salem, Virginia, Jesse Bradley joined the Navy in February 1942. Bradley served on the U.S.S. Yorktown (CV-10) as a gunner on a 40mm anti-aircraft gun. While serving in the Pacific, Bradley wrote to his wife, Lillian, almost every day. Lillian, too, was a frequent letter-writer. For the duration of their separation, Lillian wrote to her husband every day–sometimes twice a day.

During Christmas of 1944, the U.S.S. Yorktown was at Ulithi Lagoon in the western Pacific, several hundred miles southwest of Guam. Bradley, who kept a diary, noted that on Christmas day he received a package from Lillian. This V-Mail that he sent to Lillian was posted well before Christmas, however. Notice the stamp on the back: “Received in New York prior to 1 December and held for appropriate Christmas delivery.” 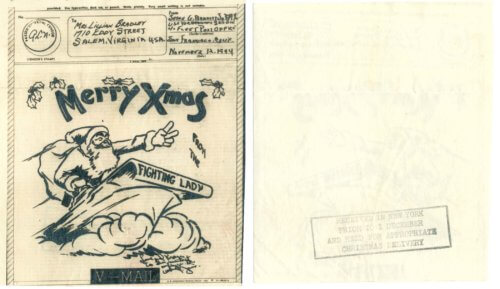 1944 Christmas V-Mail from Jesse Bradley to his wife, Lillian.

V-Mail, or Victory Mail, allowed both service men and loved ones at home a way to send mail that reduced shipping space. Using a special form, the sender would clearly write and address their letter. The form was then photographed, microfilmed, and the film sent overseas. At its destination, the film was processed, printed, and delivered. Using this method freed up space on ships and planes for necessary wartime materials and equipment. According to the National Postal Museum, using V-Mail instead of traditional mail reduced the space and weight of the mail by up 98%.

This V-Mail from Bradley is specific to the U.S.S. Yorktown. During World War II, ships, organizations such as the Red Cross, and specific units would produce holiday templates that soldiers and sailors could send home to their families. These images could be unique–such as this one that has a drawing of the U.S.S. Yorktown and features her nickname–or generic, featuring a simple holiday greeting. Those serving would only need to address and sign to send greetings home.