As we approach the 75th Anniversary of “Victory in Europe” (V-E) Day, I thought that I would take a look at the material in the archives and spotlight a view that we may not normally look for: how V-E Day was received by our troops in the Pacific. This is a broad question, and clearly there were many reactions to this important event. I’m going to look a little closer at the reaction of one sailor.

Jesse Bradley, of Salem, Virginia, joined the US Navy in February of 1942. By spring of 1943 he was assigned to the USS Yorktown, where he served as an anti-aircraft gunner for the duration of the war. He and his wife Lillian wrote to each other almost every day that they were separated. Jesse kept a diary for most of 1944 and 1945, writing down observations each day. At times, these entries were lengthy, running several pages long. Some days, the entries were brief. “Wrote a letter to Lillian” was a short entry that appears often.

We can assume that these diaries were important to Jesse and to his family. We can also guess that other materials that were donated were also important. Several newsletters and radio bulletins were included with the materials donated by the Bradley family. One such bulletin details the collapse of Germany. 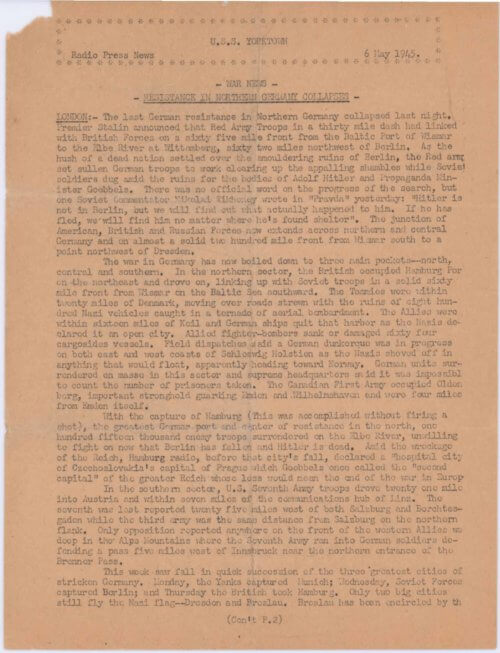 Adolf Hitler died on April 30, 1945. Jesse wrote in his diary on May 2, “I heard today at 1600 that Hitler is dead and the Germans in N. Italy gave up their arms.” The rest of the day’s entry is about refueling and resupplying the ship. For the rest of the month, Jesse wrote of mail he had written and received, and of action around Okinawa. No more mentions of Hitler, or of the war in Europe ending. Reading his entries, he appears focused on his role in fighting Japan and on communicating with his wife. 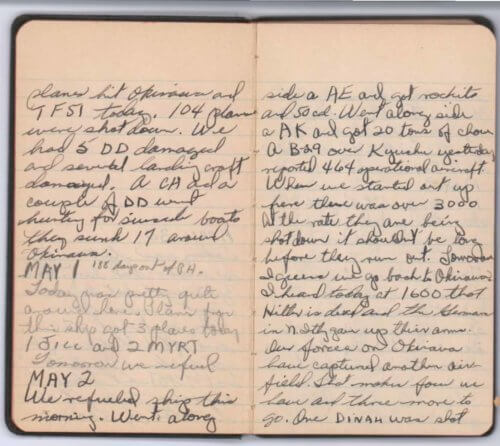 The material and records that we save tell a story to others about what we value. When things are donated to the archives, we know that:

What materials are you saving? What type of story will they tell your family in the future?

by Heidi Sheldon, Archivist at the Virginia War Memorial

From the Archives
Plan Your Visit