This story starts in Southwest Virginia and includes veterans from WWII, Vietnam, and Iraq.  I hope that you enjoy it.

My family has deep roots in Southwest Virginia and my whole life I’ve spent time there.  This summer, while on my way to the Pulaski County Administration Office, I came across a sign for the Southwest Veterans Cemetery in Dublin, Virginia. Since I had just started working at the Virginia War Memorial, I figured I’d check it out.

I met Lois in the cemetery’s administrative office.  We chatted and she invited me to come back another day when their grounds manager could provide a tour of the cemetery.  When I returned later with my brother-in-law, Lois smiled and said she was surprised that I came back, being on vacation and all.  I proudly told her I always keep my word.  I was introduced to Grounds Manager Travis, and we began our tour of the cemetery.

The grounds of the Southwest Veterans Cemetery in Dublin, Virginia, are beautiful and serene.  The cemetery is one of three in Virginia that are overseen and maintained by the Virginia Department of Veterans Services.

Below is a picture of me (left) and my brother-in-law in front of the Southwest Veterans Cemetery in Dublin, Virginia. If you look closely, you can see Mount Draper in the background. 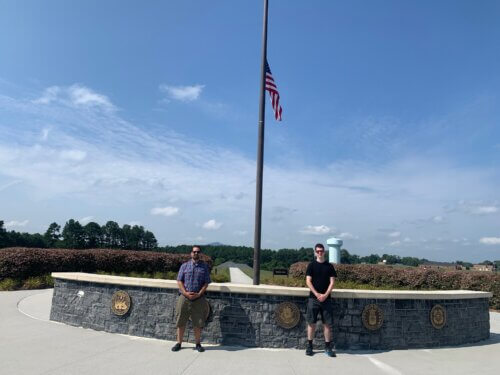 During our tour, Travis showed us how much care goes into honoring these Virginia veterans.  Afterward we stopped by the main office to say goodbye to Lois where I also picked up a flyer. 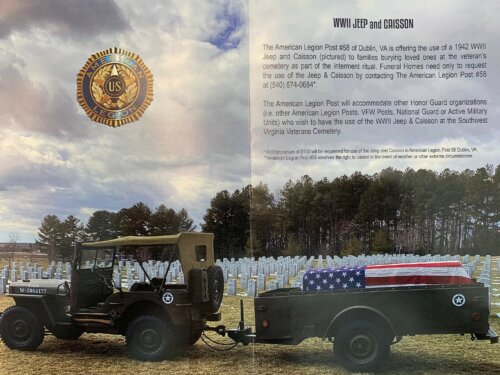 Some years ago Robert Lamp, a WWII veteran from Dublin, purchased a 1942 WWII jeep.  As a member of Post 58, he hoped to use the jeep for parades.  Unfortunately, Lamp passed away in 2019, never seeing his restoration dream for his jeep realized. Per his estate’s request, the jeep was given to Moldovan, a 1960-1967 Navy veteran, who works as an adjunct professor at Radford University.

When Moldovan initially took up the restoration, almost everyone told him the jeep was a lost cause.  But statements like “it’s a rust bucket” and “you better just junk it” didn’t deter this old warrior.  Moldovan had a vision for the jeep beyond parades. Since 2009 Moldovan had Commanded and served in Post 58’s Honor Guard Team.  The Honor Guard was created to support the newly created Southwest Virginia Veteran Cemetery.  Supporting as many as 100 funeral honor ceremonies a year, he was very familiar with the interment process.  Moldovan envisioned the jeep being used to support the Honor Guard Team.

To get the ball rolling, he placed an ad for help in the local weekly newspaper, The Patriot.  Only one person would respond to the ad.  His name was Gaybor Edjed and he would change everything.

Edjed is a first generation American whose family emigrated from Hungary.  He and his brother and sister grew up in Pulaski. Edjed is a U.S. Air Force Veteran and, after his service, made a living as a long distance truck driver.  After he retired, he enjoyed restoring old tractors.  After thoroughly inspecting Moldovan’s jeep, he said that he could restore it, but that it would mean taking the jeep all the way down to its frame.

He worked on the jeep seven days a week for three months and the result was truly amazing. 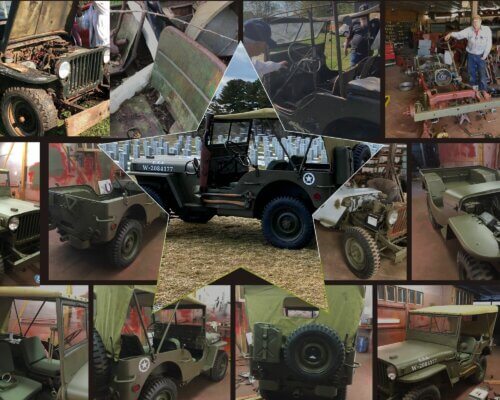 As he worked, Moldovan continued to raise money for the jeep renovations. Having retired from the police force as a Lieutenant of Investigations, Moldovan still had strong ties to the law enforcement community.  Through these connections he found another interested party. Jim Rowe, a police officer in Blacksburg, encouraged Moldovan to purchase a 16-foot Korean War trailer previously used for transporting communications equipment.  It’s hard to imagine how Officer Rowe envisioned turning the trailer into a caisson, but together Moldovan and Rowe made it happen.

Just take a look at these pictures – it’s so amazing to see how goodwill and honor can evolve into the most incredible things.

Talking with Moldovan this past summer was a lot of fun and, for a Navy guy, he’s not half bad! I promised Moldovan that I would write this blog post and I figured that would be the end of the story.  Then on September 11, 2021, something happened.

As we were wrapping up the September 11, 2021 Commonwealth’s Patriots Day program at the Virginia War Memorial, I noticed a police officer getting ready to leave on his motorcycle.  I had seen him earlier in the day but had not had the chance to speak with him.  As he was packing up to get on the road, I stopped to say hello and found out that he was from Blacksburg.  As we spoke, he mentioned that he had been at the Pentagon on September 11, 2001 and wanted to see our ceremony.  After hearing his story and understanding that he was from the same area as the Southwest Veterans Cemetery, I asked him if he knew about the jeep and the caisson.  I was shocked and surprised to find out that he was the guy that encouraged Moldovan to buy the communications trailer and turn it into the caisson: Jim Rowe!  He and I had never met but now we were like old buddies. I was delighted. How cool is that? 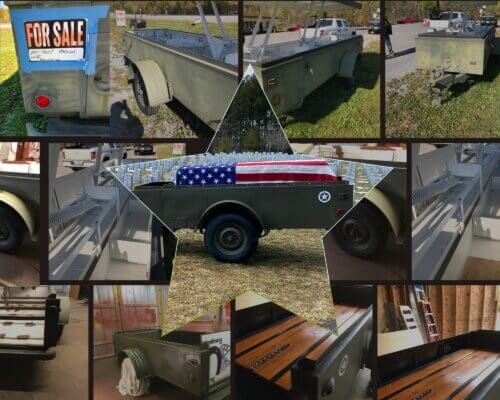 Be sure to share the below information with anyone you know in the Southwest of the state:

The American Legion Post 58 of Dublin, Virginia will provide their 1942 WWII jeep and caisson to families burying loved ones at the veterans cemetery as part of the interment ceremony. Funeral Homes need only to request the use of the jeep and caisson by contacting Post 58 at (540) 674-068.