This column initially appeared in the Richmond Times-Dispatch on March 28, 2020.

On Wednesday, April 1, many people will mark the day with practical jokes and pranks. But it is well to remember that April Fools’ Day 75 years ago signaled the beginning of one of World War II’s longest, bloodiest and most desperate battles. With the war in Europe winding down and the enemy armed forces disintegrating in the face of the Allied onslaught, Germany formally surrendered on May 7, 1945, thereby ending six years of combat operations. Soon after millions of people throughout Europe and the U.S. celebrated the return of peace on VE (Victory in Europe) Day.

For many Americans, however, it was premature to celebrate. The war seemed far from over to those who had loved ones serving in the Pacific. Indeed, the U.S. and its allies faced the possibility of the most costly campaign of the entire war — the invasion of Japan.

Nevertheless, there was one more obstacle in the way before an attack on the mainland could begin. The capture of the nearly 460-square-mile island of Okinawa, located 325 miles south of the mainland, was essential to the success of the invasion. The island would serve as a jumping-off place for more than a million troops who would be engaged, as well as the site of numerous air bases needed to continue a devastating bombing campaign against Japanese cities.

Based on the experience from earlier island campaigns — Tarawa, Saipan, Iwo Jima and others — planners for the invasion of Okinawa expected even heavier losses. The Pentagon ordered a million Purple Hearts in anticipation of a long and bloody struggle. Many of those medals awarded today are from that surplus stock.

Army Lt. Gen. Simon B. Buckner, son of a Confederate general, served as commander of this combined U.S. Army-Navy-Marine Corps operation. Early in the morning of April 1, the American Fifth Fleet opened up on Japanese positions with the war’s heaviest bombardment, hoping to prevent the casualties experienced at Normandy’s Omaha Beach the previous year.

When the first wave of Americans waded ashore, they were stunned that Japanese defenders put up little resistance. They immediately pushed inland, many reaching their objectives within two hours. Soon wave after wave of reinforcements, ammunition, supplies and equipment came ashore effortlessly. As one Marine officer observed, the landing looked “more like a pastoral scene than a battle. We were all incredulous, as if we had stepped into a fairy tale.”

It did not take long for this fairy tale to turn into a living nightmare. The tableau being rolled out had been carefully planned by Japanese Gen. Mitsuru Ushijima. He allowed the Americans to come ashore virtually unopposed after pulling most of his force back to the hilly southern part of the island. After reducing the lightly held northern defenses, U.S. troops began to concentrate their efforts on the southern sector. There they ran into formidable defenses that stopped them in their tracks.

Then the Japanese struck. On April 6 and 7, nearly 700 enemy aircraft, including 350 kamikaze suicide planes, pounded the American-controlled beaches and the naval task force offshore. They unleashed the huge battleship Yamato and several other ships to attack the American fleet and troops ashore, only to see the entire Japanese flotilla sent to the bottom. In the meantime, the suicide attacks on the American fleet continued unabated for weeks, eventually sinking 34 ships and inflicting 9,700 casualties, the most the Navy suffered during the war in one battle.

Back on land, as the days passed into weeks, U.S. forces became locked in a relentlessly brutal fight as they challenged deeply entrenched Japanese troops backed by heavy artillery. This made for a slow, grueling bloodletting that some compared to the battles of World War I. Progress was measured in feet amid drenching rain and deep mud. As the Americans became bogged down, Ushijima launched a desperate counterattack in early May that resulted in nothing but 6,000 more Japanese deaths.

By late May, Ushijima, having lost more than half of his troops, backed up to a shorter defensive line near the southern tip of Okinawa where they continued the fight for several more weeks. Realizing the futility of continued resistance he, along with most of his remaining troops, committed hara-kiri in late June. Control of Okinawa now belonged to American forces.

More than 170,000 Japanese and native Okinawans died during this brutal campaign. Some 12,000 American service members were killed, including Buckner, who was felled by a sniper. He was one of two of the highest ranking Americans killed during the war.

Planners for the invasion and eventual defeat of Japan estimated that it would cost a million American lives. “Victory was never in doubt,” observed Marine Maj. Gen. Graves Erskine. “What was in doubt in all our minds,” he continued, “was whether there would be any of us left to dedicate our cemetery at the end.”

The feared bloodbath that Erskine and others predicted never occurred. With the dropping of atomic bombs on Hiroshima and Nagasaki, the Japanese surrendered within days.

Those who survived Okinawa carried awful memories of that experience with them for the rest of their lives. I sometimes wonder if that was true of my Uncle Tom Bryan, who became a prominent physician in Nashville after the war. I knew that he had served as an Army doctor in the Pacific, but it wasn’t until after his death that I learned that he had been awarded a Bronze Star for valor for an incident on Okinawa when he risked his own life to drive a jeep that came under enemy fire to treat three badly wounded soldiers.

His son said he rarely talked about the war. When asked about the medal, he would say that it was only for performing his duty. Duty, indeed. As historian Stephen Ambrose wrote about men like my uncle: “So they fought, and won, and all of us living and yet to be born, must be forever profoundly grateful.” Amen! 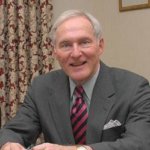 Dr. Charles F. Bryan, Jr., Ph.D. has served on the Virginia War Memorial Foundation’s Board of Directors since 2015.

Education, In the News
Plan Your Visit