Mr Baugh served with the 99th Fighter Sqaudron, 332nd Fighter Group as one of the original Tuskegee Airmen. He flew a total of 35 combat missions during World War II. 1.5 aerial victories vs. German FW-190s during WWII in Italy in 1944. 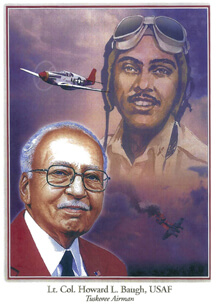