He was on a B-24A #40-2374 which took off from Broome Airfield in Western Australia going to Perth carrying 19 evacuees from Java. They were attacked by Japanese fighters that strafed the plane and fuel tanks caught on fire. The plane crashed into the Roebuck Bay approx 10 miles from shore. Two men made it ashore, but only one survived. 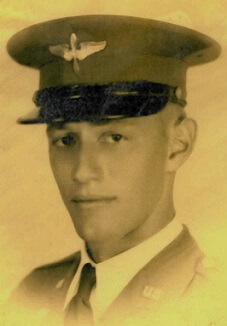