Maj Bowles enlisted in the Air Force in 1951; received radio communications training at Presque Island, Maine; and attended Officer Candidate School in Texas. He served 4 years in Japan and was stationed at McConnell Air Force Base in Kansas before starting his fourth tour of duty in Vietnam on August 6, 1965. On November 3, 1965, the F-105D Thundercat (a supersonic fighter-bomber) that he was piloting was lost near Ban Luu, 52 kilometers from Thais Nguyen, Vietnam. Before his military career, he attended Beverly Manor High School in Staunton and Staunton Military Academy before graduating from Wilson Memorial High School in Fishersville in 1949 where he was active in football, baseball, and basketball. 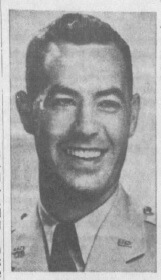