Staff Sergeant Hollenbeck served with the 578th Bombardment Squadron, 392nd Bombardment Group, 8th Air Force as a Right Waist Gunner on B-24 Liberator (41-29002). Other crew members reported that after he bailed out of the plane, he was killed by German civilians. His son was born 9 days after his death.

Before the war, he was employed by Birtcherd’s Dairy, Norfolk, Virginia.

He is buried in Roseland Cemetery, Reedville, Virginia. 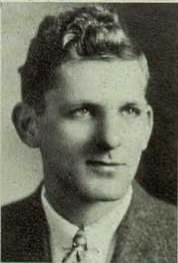