PFC Poff served in the Army Infantry during World War II and enlisted in Quantico, VA. He entered into the service in Roanoke, VA on 9/17/1941. Enlistment for Panama Canal Dept. Battles and Campaigns: New Guinea. He was involved in three campaigns in the Pacific Theater. PFC Poff passed away on May 31, 1966 in Bent Mountain, VA. 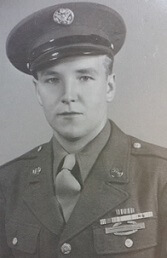