On March 18, 1971, South Vietnamese troops were decimated under an attack by the North Vietnamese. The only remaining troops became surrounded and trapped in a nearby bomb crater. As they were desperately radioing for help, First Lieutenant Alan Boffman and Captain Keith Brandt volunteered to lead a group of Cobra gunships for aerial support. As Alan’s helicopter approached its target, the North Vietnamese began firing. The helicopter burst into flames, totally destroying the controls. As they fell to the earth, the men issued one last message, “I’ve lost my engine and my transmission is breaking up. Good-bye. Send my love to my family. I’m dead.” 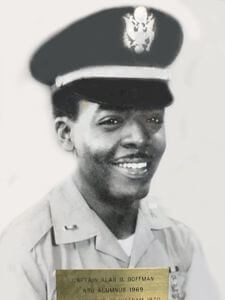