Learning from the Home Front

The Virginia War Memorial Education team is excited to provide a variety of live, interactive lessons for students and learners of all ages!

All of the VWM’s livestream options are FREE, though many require advance registration. Sign up soon, or space may run out! Recordings of each livestream may also become available on the Educational Resources page following the program.

Information about upcoming livestreams is available below. New programs are added often, so check back regularly and follow us on Facebook to stay up to date!

“It Wasn’t a Milk Run!” – Stories from the Army Air Corps 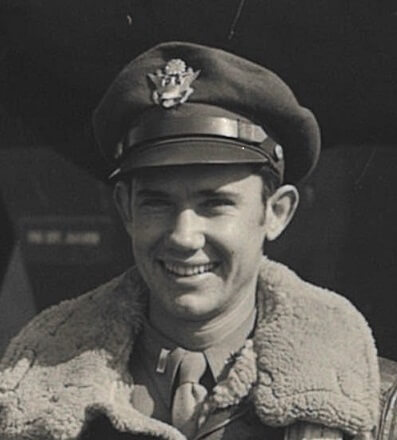 Join Jim Triesler, the VWM’s Director of Education, as he explores the experiences of the Army Air Corps over Europe during World War II. Hear their personal stories, many of which are unpublished, as the men describe what it was like to fly combat missions hundreds of miles over enemy territory. The men of the 8th Air Force and the 15th Air Force, including the Tuskegee Airmen, will be featured. 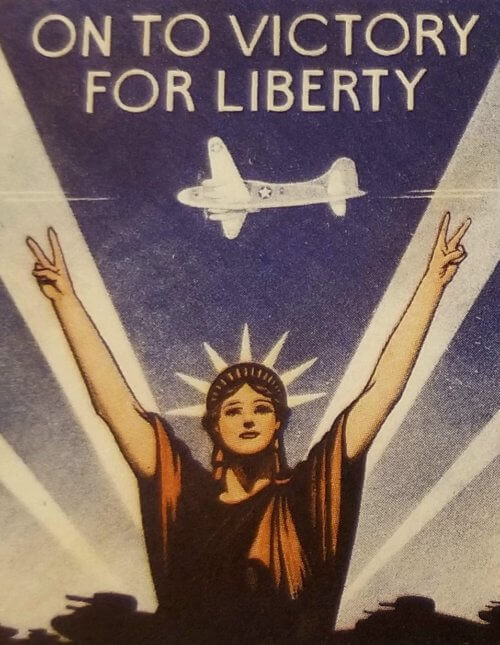 In the first installment of Postal Covers: From Propaganda to Patriotism, we explored some of the exciting postal covers from the 19th century (view recording: https://vimeo.com/420348077). Now, join us as Jim Triesler, the VWM’s Director of Education, explores the history surrounding postal covers from the 20th century, with a strong emphasis on those from World War II. 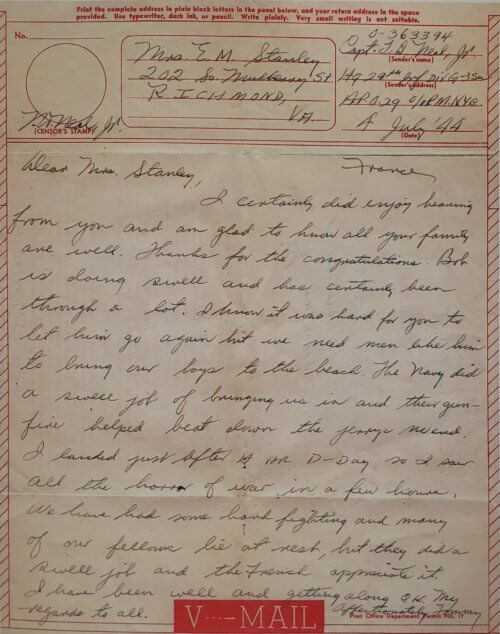 From the Archives: D-Day Related Material from the VA War Memorial

You’ve seen the pictures, news footage, and popular culture representations of D-Day. As we look back and reflect on the 76th anniversary of the invasion, join Archivist Heidi Sheldon to take a closer look at some of the materials in the collection of the Virginia War Memorial that relate to this historic event.

Discover history from those who lived it with the VA War Memorial’s Vietnam Veterans Panel. Hear these veterans’ stories of war, and come prepared with questions! 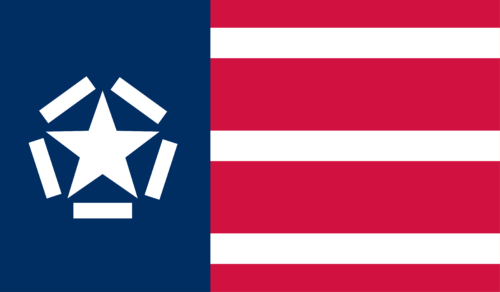 How was Virginia’s Freedom Flag born? It began on September 11, 2001, a day which became America’s modern day of infamy. The nearly 3,000 lives lost during the terrorist attacks on 9/11 made it the deadliest day of bloodshed on American soil since the Civil War, and launched the Global War on Terrorism. Learn how the Freedom Flag went from a sketch on a napkin in response to America’s promise to “Never Forget 9/11,” to becoming Virginia’s Official Flag of Remembrance for September 11, 2001. Presented by John Riley and Tara Krohn of the Freedom Flag Foundation. 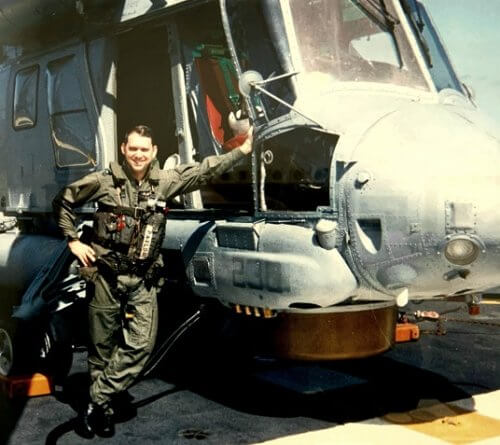 Eyewitness to History: Cold War Recollections of a Naval Aviator

Join us for an interview with LCDR, USN (Ret) Robert Paylor as he describes his service during the Cold War and his personal recollections of Grenada and Beirut. In the early 1980s, LCDR Paylor piloted helicopters from the deck of the USS Guam. Come prepared to ask questions and learn more about this often forgotten period of history! 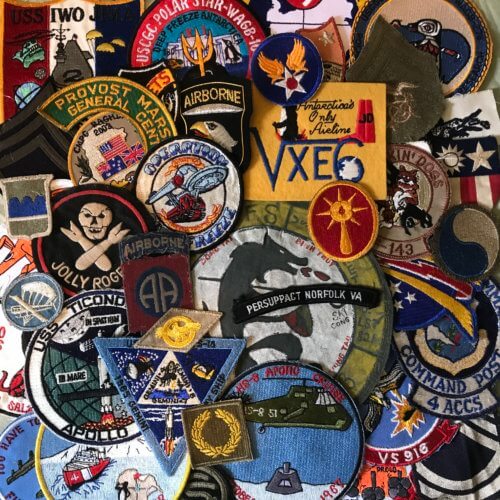 Have you ever wondered what the patches on military uniforms mean? Join the VWM Curator Jesse Smith on his talk that will focus on U.S. Army Patches and their location on uniforms from World War I and World War II. Learn as he shares his knowledge of insignia and patches to answer the questions “What is this patch, and what does it mean?” Discover stories of interesting divisional patches and their backgrounds, including a few from the US Navy, Coast Guard, Air Force, and Marine Corps as well. Enjoy a beginner’s guide to how to tell the ages of patches and insignia, and on basic care of loose patches. 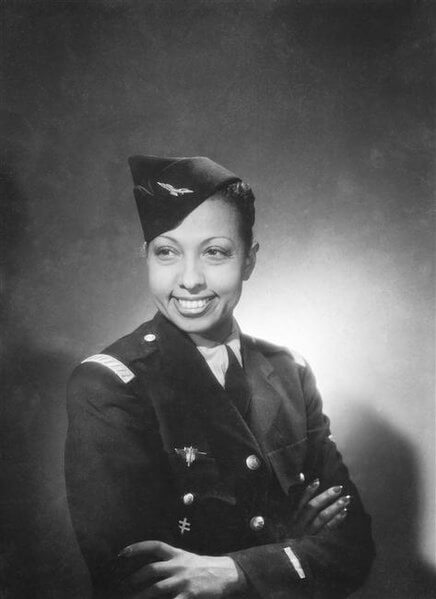 Discover the fascinating and rarely discussed role of Allied women on the front lines during the Second World War. This unique presentation covers virtually all Allied countries involved in the war effort and highlights a number of women along with their decorations and/or awards. The program is the result of many months of research by Mark Turner, Assistant Professor at the U.S. Army Command and General Staff School’s Fort Lee campus.

Teaching the Civil War with Artifacts 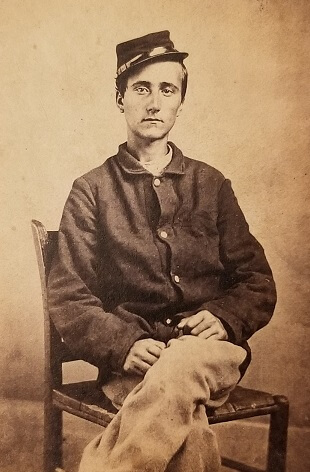 Join the VWM Director of Education Jim Triesler as he shares stories of the Civil War through the use of original photographs, letters, and artifacts. This lecture will be of interest to teachers and anyone who is fascinated by 19th century history. 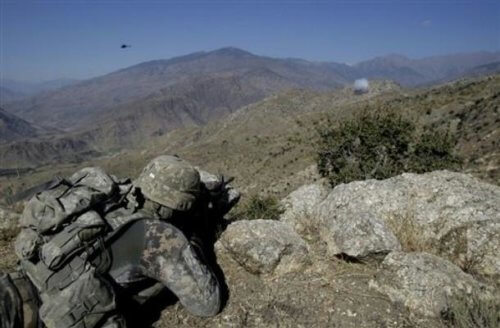 A Firefight in Afghanistan: What Happened on Mountain 2610

In this program, Dr. Clay Mountcastle will share the story of a battle that took place in June 2006, with soldiers from the US Army’s 10th Mountain Division high in the mountains of northeastern Afghanistan. At the end of the desperate fight, four Americans were dead, including a Medal of Honor recipient and a local hero from Mechanicsville. Mountcastle, who authored a study of the battle, will explain what happened, why, and how this one battle illustrates why fighting a war in Afghanistan is so damned hard.

“Caring for your Collections: Protecting your Paper and Photographs” – Wednesday, May 13, 2:00pm – View recording here

“Postal Covers: From Propaganda to Patriotism” – Tuesday, May 19, 10:30am – View recording here 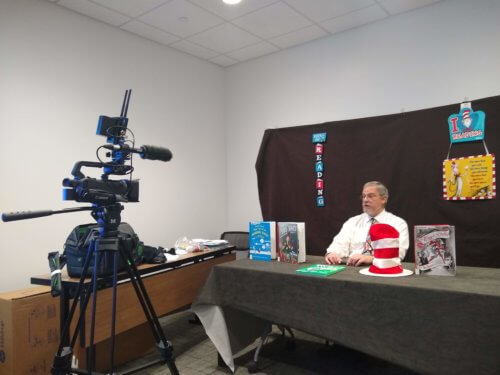 Interested in scheduling a livestream for your classroom or group? The VWM Education team is happy to work with you to plan a personalized event!

Reach out to education@vawarmemorial.org to find out more.

Scroll through all of the VWM’s previously broadcast livestreams below or on Vimeo: