Captain Allen Townsend Winmill served with the 1327th Army Air Force Base, Air Transport Command that was stationed out of Kwanghan, China.

“Towney” graduated from Harvard University and Yale Law School where he played on their polo teams.  He was employed by Hawkins, Dellafield and Longfellow law firm in New York.

He enlisted as an aviation cadet in October 1941 and he got married in 1942 while stationed in Colorado.

Captain Winmill was the co-pilot of a C87 #43-30590 that was on a mission from China to Tezpur, India, when the plane developed engine trouble.  All four crew members bailed out of the plane and all four chutes were observed opening.  The crew members landed in the jungle near Shingbwiyang, Burma; however, Captain Winmill was never found and presumed dead on October 10, 1944. 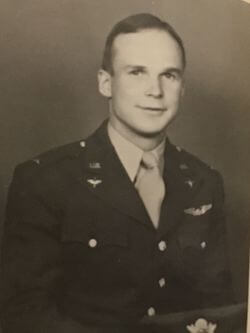