First Lieutenant Shea was killed in action defending Pork Chop Hill from the North Korean army on July 8, 1953, serving with the 7th Infantry Division. He ordered his platoon back while single-handedly fighting off 4 North Koreans. He was posthumously awarded the Medal of Honor. He was a 1952 graduate of the United States Military Academy at West Point, where he was an outstanding athlete excelling in track, cross country and gymnastics. Serving among him was Master Sergeant Kenneth Young who stated, “As long as Lieutenant Shea was in our company, he had 100 percent backing from everyone who knew him. His men would follow him anywhere.” 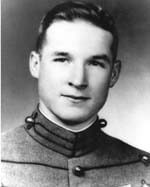