Lieutenant John Graham Boyd was a pilot who served with the US Navy Reserves and was stationed on the USS Petrof Bay (CV-80).

He graduated from John Marshall High School, Richmond, Virginia, in 1937 where he was the junior class president.  He attended VPI for three years studying electrical engineering.  He enlisted in the Navy Reserves as an aviation cadet and earned his wings in Pensacola, Florida.  He was sent to Corpus Christi, Texas as flight instruction.  He got married while stationed there.

In 1942, Lt. Graham and another pilot spotted the life raft of Captain Eddie Rickenbacker and his crew who had been afloat on the Pacific for 21 days.

On July 18, 1944, Lt. Boyd was attempting a takeoff in an FM-2 Wildcat from the USS Petrof Bay when the plane swerved left and went over the port catwalk short of the bow.  Immediately a search party was initiated and only a gasoline slick was seen in the ocean. 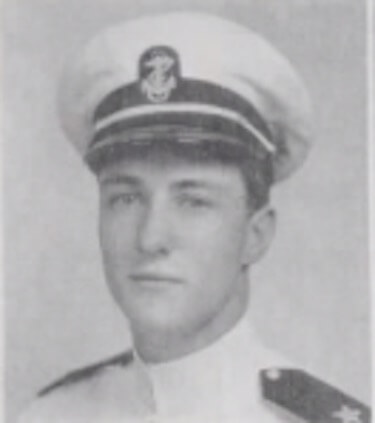