Lieutenant Monteith was awarded the Medal of Honor posthumously for his sacrifice in action on June 6, 1944 at Omaha Beach, Normandy, France. The medal was presented to his mother in her home in Richmond, Virginia in the presence of Governor Colgate Darden. Lieutenant Monteith had previously attended Thomas Jefferson High School and the Virginia Polytechnic Institute and State University (Virginia Tech), class of 1941. He was one 10 Virginia Tech alumni killed at Normandy on June 6, 1944. 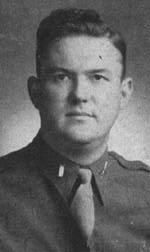