Ensign Bass was a naval aviator/pilot of a F-4F Wildcat who served with the Fighting Squadron 5 aboard the carrier USS Saratoga (CV-3).

Before the war, he graduated from Jefferson High School, attended Roanoke College and graduated from Richmond Professional Institute in 1937.  He taught art in the Roanoke schools and got married.

He enlisted in March 1941 as an aviation cadet and was commissioned as an Ensign. He received flight training and reported to aircraft carrier USS Saratoga (CV-3) in early 1942.  During the Battle of Midway, his plane was damaged and he was still able to shoot down a Japanese dive bomber and he was awarded the Navy Cross.

Assigned to Fighting Squadron 5 on board Saratoga, Bass again flew in the combat air patrol during the Battle of the Eastern Solomons and he was shot down and reported missing on August 24, 1942.

In August 1944, a high speed transport ship the USS Horace A Bass (APD-124) was commissioned out of Massacusettes in Ensign Bass’s name. 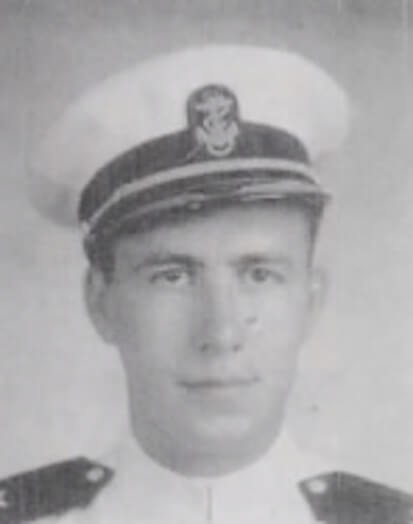